skip to main | skip to sidebar

Brief Review of The First Assassin by John J. Miller 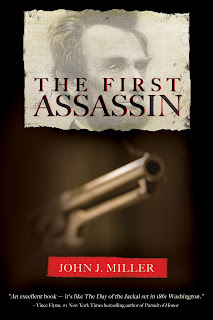 The First Assassin is a fictional historical thriller that takes place predominantly in Washington D. C. in April of 1861 after the attack on Fort Sumter and revolves around a plot by secessionists in South Carolina to assassinate President Abraham Lincoln.

The opening for the book deals with Lincoln's travel to Washington for his inauguration in February of 1861, and is based mainly on the "Baltimore Plot", an alleged conspiracy to assassinate Lincoln before his inauguration. It is still debated whether or not the threat was real and if the plan to sneak Lincoln into Washington D.C. was the wisest course of action (Lincoln regretted it later); however, journal notes written by Horace Purdy of Danbury Connecticut during this time suggests that many people (besides Allan Pinkerton) thought these threats were serious.

The book continues with the story of the travel by a runaway slave (Portia) to Washington on a mission devised by other slaves to warn Lincoln and thus strengthen their chances of being freed by the "abolitionist" president.  The story also deals with the professional struggles of Colonel Charles P. Rook, the soldier assigned to provide security for Lincoln against southern sympathisers (and ultimately the hired assassin) as well as his own superior officer (General  Winfield Scott) who believes that the threat against Lincoln is exaggerated.

The book is well-written and suspenseful enough to keep the pages turning. Some parts are quite predictable such as who the informant is for the main female southern sympathiser and the main villain gets tripped up too many times to be considered a truly convincing threat. Moreover, there are some loose ends that are never tied up, especially the storyline of another group with a plan to cause trouble in the Capitol. Overall, however, I found The First Assassin to be a realistic (i.e. the characters and historical setting) and highly entertaining story.  In fact, when I was finished with the book I found myself thinking that the story would actually make a great movie.

For more information you can check out the author's website.