skip to main | skip to sidebar

Horace Purdy was 26 years old on April 12, 1861, the day South Carolina troops opened their bombardment of Fort Sumter, near Charleston. Seven days later on April 19th, Purdy was mustered into the 1st Connecticut Volunteer Regiment as a private. This blog will focus on Purdy's experiences through the months leading up to the war, his enlistment and day to day activities of his regiment, culminating in the disbanding of the regiment after the First Battle of Bull Run due to expired enlistments .

Purdy was a "three month man", one of thousands of men in the north who responded to President Abraham Lincoln's call for troops after the fall of Fort Sumter.

Purdy was from Danbury Connecticut and at the time of his enlistment worked as a hatter, although after the war he sold insurance through his own company, Purdy and Son. Like many young men from the north he was heavily involved with his church (Methodist - his father in law was a reverend). He was a Republican (for the rest of his life), pro-union, and a member of the Wooster Light Guards, a local militia unit. This unit made up much of Company E of the 1st Regiment.

Purdy was born in Danbury on November 11, 1835 to Augustus Purdy and Nancy Mills. He had six siblings, only two of which survived to adulthood; Harriet, his senior by four years, and a younger bother George who was 19 when the war broke out. 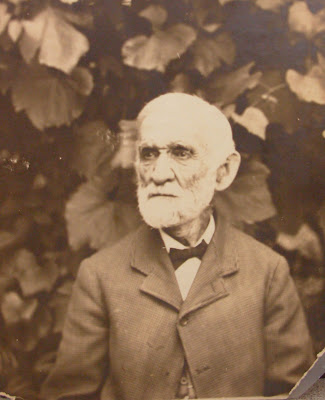 Horace married Anne Augusta Griswold on December 3, 1857. In April of 1861 she is 25 years old and pregnant with their first child, a boy who would be born at the end of August. Although this child would die before the age of three, Anne ("Gussie") and Horace would have two more children, George Lincoln (born 1864) and Frances "Fannie" Grant (born 1872). I am a direct descendant of Fannie Purdy.

Gussie was directly descended from two prominent families in Connecticut history, the Websters and the Griswolds. On the Webster side, Gussie's lineage stretched back to the Honorable John Webster who was the 5th governor of the Connecticut Colony (Noah Webster of dictionary fame is a distant relative). The Griswold lineage also stretches back to England, and Griswold's played major parts in the founding of many towns in Connecticut and in the western reserve (now Ohio). Indeed there is a town of Griswold, a Fort Griswold and a Griswold Museum in Connecticut today.

Horace did not re-enlist in another unit after his three-month stint. He continued as a hatter until 1869 and then started his insurance business until his death. On October 22, 1889 he attended the 17th Connecticut Volunteer Regiment's reunion at Gettysburg, accompanied by his younger brother George who had fought with that regiment in that battle.

Horace Purdy died on April 2, 1909 at the age of 74. The photo was taken near the end of his life and is the only existing photo. A photo taken in New Haven, CT in April of 1861 and sent to his wife is missing and most likely lost.
Posted by Bill Parker at 8:33 PM